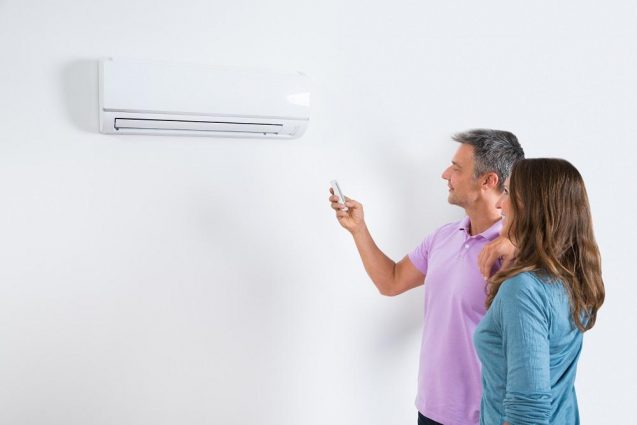 Air conditioners use refrigeration to cool down indoor air, taking advantage of an amazing law of physics: When liquid converts into a gas (in a process called phase conversion), it absorbs heat. Air conditioners utilize this feature of phase conversion by forcing special chemical compounds to evaporate and condense repeatedly in a closed system of coils.

The compounds involved are known as refrigerants that have properties enabling them to convert at relatively low temperatures. Air conditioners also contain fans that move the warm interior air over these cold, refrigerant-filled coils. In fact, central air conditioners have a whole system of ducts designed to funnel air to and from these cooling coils.

Flowing of hot air over the cold, creates low-pressure evaporator coils, refrigerant inside absorbs heat, as it converts from a liquid to a gaseous state. To keep efficient cooling, the air conditioner has to convert the refrigerant gas back to a liquid again. This take place when a compressor puts the gas under high pressure, which creates extra heat. All the extra heat created by compressing the gas is then passed to the outdoors with the help of a second set of coils called condenser coils, and a second fan. As the gas cools, it changes back to a liquid, and the process repeats. It is an endless and efficient cycle: liquid refrigerant, conversion to a gas/ heat absorption, compression, and phase transition back to a liquid again.

Remember that there are two distinct things going on in an air conditioner. Refrigerant is cooling the indoor air, and the resulting gas is continually compressed and cooled to convert back to a liquid again.

How Its Parts Functions?

An air conditioning system typically has four parts: an evaporator, a compressor, a condenser, and an expansion device. The part inside the home where the refrigerant evaporates is the evaporator, as is obvious. Fans blow air across the evaporator’s coils in the home.

The vaporized refrigerant then passes into the compressor, which is located outside in the air conditioning unit (or sometimes found on the roof), along with the condenser. As the name suggests, the compressor compresses the gas to a state of higher pressure and higher temperature.

Furthermore, the hot pressurized gas flows over the third component named condenser. Here, the gas condensation take place into its liquid state again as heat is radiated away. Outdoor units often have metal fins on them to help dispel the heat more quickly.

The cooled-off liquid is sent back to the home. The expansion device regulates the flow of the liquid refrigerant into the evaporator, whereas, beforehand it will absorb heat and change phase from a liquid into a low-pressure gas.

Removing heat is just not all that an air conditioner does because it also conditions the air. Humidity is the amount of water vapor present in the air which is crucial in determining how our body feels the heat. A high humid environment makes you sweat even more. So, in order to render the environment inside a home or business more comfortable, air conditioners also dehumidify the air. All that water leached out of the air by air conditioners can pool in or drain out of the unit, especially on days with high humidity. The modern air conditioning unit are made with an aim to control the humidity.

Air conditioning for homes was not common in earlier days but nowadays almost all homes have air conditioners as per the requirements. With the climate getting hotter and hotter each year, air conditioners have become a necessity and are no longer a luxury appliance.